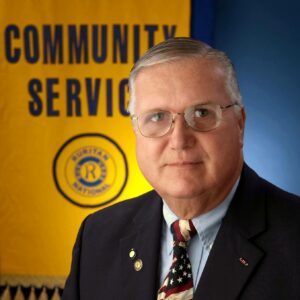 The 2014 Grand Marshal is one of the Guinea Jubilee Committee’s own, Elliott Hogge, former chairman of the Jubilee and President of the Guinea Heritage Association, who has faithfully served on the committee for many years in many capacities from the ground up. For him it has been a labor of love: love for the community he calls home and love for the people who live here with him.
Elliott Franklin Hogge grew up on Line Fence Road in a house full of love with his parents, Morris and Edith Hogge, brother Kenneth Morris, sister Carol Joy and grandmothers, Betty and Florida. After graduating from Gloucester High School, in 1965, he began working at the Naval Weapons Station, Yorktown.
In July, 1967, he married Sandra Penn, his childhood sweetheart. Six months later, he was drafted in to U.S. Army and was sent to the Republic of Vietnam, where he was awarded the Bronze Star. After active duty, Elliott and Sandra built their home on Line Fence Road, where they reared their daughter, Andrea, and their son, Jeff. They have seven grandchildren.
After a 42 year career at NWS/Yorktown, where he was awarded the Superior Civilian Medal for Valor, he retired. He spent 20 of these same years farming the land he loves. Elliott also found the time to volunteer on several local agricultural advisory boards, the Ducks Unlimited local committee, and to join the Abingdon Ruritan Club. Elliott found through the Ruritans another outlet for his commitment to make our community a better place to live and raise our families. He currently serves as President of Ruritan National and the Achilles Lodge No. 281 recognized his efforts by awarding him the Masonic Community Builders Award. He is a member and attends Union Baptist Church.