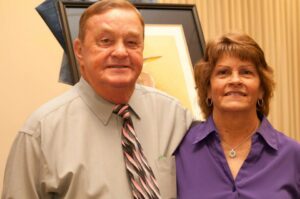 Ellis was born February 19, 1941, to the parents of Benjamin Franklin and Beulah Blanch West. Ellis was one of seven siblings, three brothers Jack, James, and Chester West, and three sisters, Hazel Glasco, Lucy Evans, and Eva Mosley.
Ellis and his lovely wife, Linda Sue (Green) West have been married 47 years. They have three children, Gina Alley, the daughter, lives in North Carolina; Jason West the oldest son lives in Mathews, Va and Joshua West, the youngest lives at home and still works the water. Ellis and Linda have four grandchildren, all girls.
Ellis started working on the water with his brothers when he was 13 years young. His occupation included crabbing, fishing, and oystering. Ellis purchased a 40 ft Chesapeake Bay Deadrise workboat that was built over in Reedville by a Mr. Newman. That same boat is still in the family being worked by Joshua, his son today.
Ellis worked the water until 1966 when Uncle Sam called him in the Army. He spent 2 years serving his country in Korea. Then it was back to the water where he worked as long as his health permitted. Later years you would see Ellis working up at the Food Lion.
In talking with Ellis about his health, he jokingly said that he was never sick until he went to work at Food Lion, no offense to Food Lion, but he attributed his previous good health to the outdoor living and plenty of fresh air on the water. I think there is a lot to be said for that.
Ellis and his wife still live in the same place where he was born on the Horse Point Road, Maryus, the heart of Guinea. Ellis stated that in all his travels he can honestly say “There is No Place like Guinea.” We are proud to have another “true Guineaman” to serve our Grand Marshall again this year.