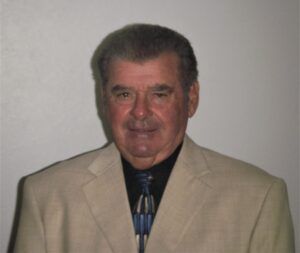 Mr. Robert Lee Greene of Jenkins Neck will serve as the Grand Marshal of the 2012 Guinea Jubilee festivities. The son of William James and Pearl Jenkins Greene, he was born in January of 1940, and in 1961 he married Marian Motley. Together the Greenes raised three children, and today their family includes daughter, Terry Stevens and her husband Billy who have one daughter; son Ronnie and his wife Kim who have two sons; and son Michael and his wife Jennifer, who has two daughters and a son. In addition, there are three great grandchildren.
Robert Lee has worked on the water for 64 years and began going crabbing with his father when he was eight years old. By the time he was 13 or 14 he had begun to crab full time with his father onboard the Pearl G, which was built in Severn by Mr. Smiley Jenkins in 1944. Wood for the V-stern vessel was harvested from Preacher Carr’s farm. Robert Lee crabbed with his father from 1953 until his father’s death in 1975, after which he worked the Pearl G until it was retired in 2001. From 2001 to present he has been working with his two sons, helping Ronnie with rock fishing in season and helping Michael crab. Love of his family is most important to Robert Lee, and he gets up at 12:30am and makes 16 sandwiches to make sure the boys have plenty of food. In addition, Marion says he is the best seafood cook in the world and that he loves to cook for the family.
Robert Lee enjoys deer hunting and has been a member of East Dragon Hunt Club for 22 years. He also likes to watch baseball and football on TV. The Greenes attend Providence Baptist Church.