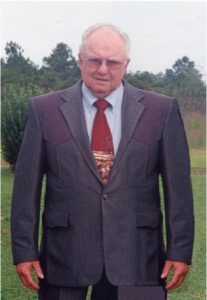 Alvin Lionel Jenkins was born on May 23, 1939 to the proud parents of Malvin Reed Jenkins and Edla Louise Brown Jenkins. Lionel was the oldest of eight children.
Lionel is married to Helen E. Jenkins and they reside on Haywood Seafood Lane in Hayes, VA. Lionel has 3 boys, Michael, Don Allen and Anthony, one girl, Gail Marie. Michael and Don Allen worked the water with their father for a period of time then Michael moved on to become a Long Haul Truck Driver and Don Allen stayed on as a waterman where he still works today.
Lionel attended Severn School until 3rd Grade and then went on to Achilles thru the 7th Grade. After one year at Gloucester High School, Lionel, like a lot of the kids in that day, quit school and went to work on the water.
His first job was culling oysters on the James River working for his Uncle Voight Jenkins. Then for the next couple of years, he worked on various boats doing the same thing. Lionel purchased his first workboat at the age of 17 which he named the “Miss Harriet” Lionel worked about 10 years fishing crabbing and oystering. He later purchased a 40ft workboat named the “Shannon Gail”, which is still being worked today by his son, Don Allen. He also worked on various dredge boats such as the “J Mike”, the “Ethel L” and the “Gloria R” for Mike Shackelford.
Lionel was forced to farming in 1972 after an accident on the boat, losing most of his hand. While farming, he also worked the water part time. During this span of time, about 20 years he farmed and set pound nets. Lionel said that he thinks that Jennings Hogge and himself is about the only two left in Guinea that can make a pound net from scratch.” Nothing written down just all in the head.”
Lionel gave his heart to the Lord in 1972 and has been a faithful servant ever since. Today he serves as a Sunday School Teacher, Deacon, and has a Nursing Home Ministry. Lionel is also known for a Gospel Bluegrass Band named “The Guinea Ramblers” Now, last but not least, is hunting. Most every Guineaman loves to hunt and so does Lionel.
Lionel states that he has lived in Guinea all his life of 70 years and does not know of a better place to be.