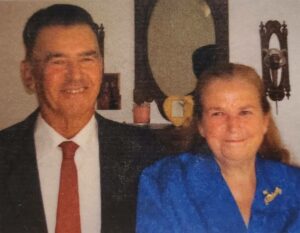 Grand Marshal of the 29th Guinea Jubilee, Mr. Tom Howard Brown embodies the qualities that guineamen share: love of God, love of Family, love of neighbors, and love of country. Born September 17, 1938 at home, just a stone’s throw from where he lives now, in 1958 Tom married the former Rosemary Davis, shown at his side in the above photograph taken on a recent Sunday morning as they prepared to attend services at the Achilles Friends Church, where Tom has been a lifelong member. Tom and Rosemary were blessed with three children: Howard, James, and Theresa. They also enjoy 5 new additions to their family: grandchildren Kelly, Kelsie, Jacob, Cody and Harley.
Tom’s working career began at the young age of 15, when he left school to work unloading feed trucks for Jennings Williams, follow by a new job as a mechanic at Colony Motors in Williamsburg. He was later drafted into the Army and sent for training at Fort Gordon, and then following specialty training he was sent to Korea. While there he completed his high school education, and was given the extraordinary opportunity to change his job duties (MOS). Due to a shortage of mechanics stationed in Korea at the time, Tom’s Commanding Officer learned of his experience at Colony Motors, and put him on a week’s trial to see if he was a good mechanic. It only took two days for the transition from infantryman to mechanic to be completed. Tom’s reputation as an ace mechanic has followed him from his Army days to his return back home where he worked at Colony Motors through 1970.
In 1971, Tom went back to work in the water with his father and brother. He had a small boat of his own, but in February 1978 he started work building a 36’ Chesapeake deadrise with a box stern. He and Kenny Hall worked together to build the boat until May 30, 1978 when the Rosemary was launched. Tom hauled seine, oystered, and crabbed on the Rosemary, and he still found time to lend a hand to do mechanic work to help other watermen keep their boats running.