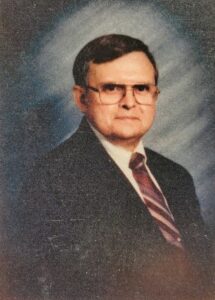 Charles Hundley Stubblefield was born on June 19, 1941 to Jack Rosser Stubblefield, Sr. and Garnett Virginia West. Charles, the youngest of six children, was raised a Christian, attending Achilles Friends Church into his early adulthood. Charles recalls some of his fondest memories from early days at Achilles Elementary School. “I would have to walk to and from school each day which was about 1 ½ miles each way, but that seemed only a few yards in those days” said Charles. We walked in groups, stopping at Otis Hogge’s Store, George Ashe’s Store or Percy Robin’s Store. If I had three nickels I might stop at all three. Ice cream cone was 5 cent and a Hugh grape soda 5 cent.
He later attended the former Gloucester High School, which is now Page Middle School, where he graduated in 1959. Charles continued his education taking business courses at the College of William and Mary, Christopher Newport University, and Rappahannock Community College.
Charles first began working while in high school at a local drug store, and then worked for a local Ford tractor dealership. He continued to work in the private sector until 1969 when he was employed by the county as a business and professional license clerk in the Commissioner of Revenue’s office. Two years later Charles ran for the Commissioner’s seat where he defeated two opponents to become the youngest Commission in the history of the county, one of the youngest in the State, and the first from Guinea. He remained in office until June of 1978 when, at the age of 42, he decided to return to private business as a general manager for Lipscom’s Farm Equipment.
After a few years out of the Commissioner’s Office, he returned to run in 5 more elections. Charles retired on December 2004 with 30 years of service. Charles said that he had run in 7 elections and that was enough. He said that he enjoyed all of the county citizens coming in on business or just coming in to say hello.
In 1984, Charles married Elaine Coates and state that she was truly his backbone through all his political life. Charles and Elaine decided to purchase his sisters interest in the family home and to live in the house that his father started to build in 1919. “With very little money, it took father years to finish the house. Not many people can sleep in the same house and in the same room they were born in 66 years ago. I have had one of the best lives that God could give any person. I love Guinea.