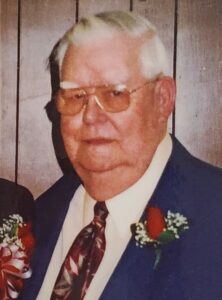 Julius A. Edwards came to Guinea in 1942 at the age of 16. He had been hired by Tidewater Construction Company and sent to a job site at Cheatham Annex. A co-worker told him about a little place called “Guinea” where he could get room and board for $9.00 a week. The boarding house was next to Perrin store and Post Office.
It was on the porch of Perrin Store that Julius first laid eyes on Estelle Kellum, his future wife. The young couple’s first child was born in 1945 and in 1946, they settled in their first house that Julius built himself for $675.00, including the cost of the land. The family later moved to a bigger home on Line Fence Road where they still reside. With one son, two daughters, seven granddaughters, three great-granddaughters, and three great-grandsons, it seems the Edwards legacy will go on for some time.
Julius started building homes and cabinets in 1945. At the age of 65, he turned the business over to his son, Herbert Paul. J. A. Edwards Custom Cabinets continues to turn out high quality cabinets to this day. Julius works at the cabinet shop staying busy with “odds and ends,” as he puts it, but states, “My greatest joy is building souls for the Lord and stuff out of wood.”

** Canceled due to Hurricane Isabel