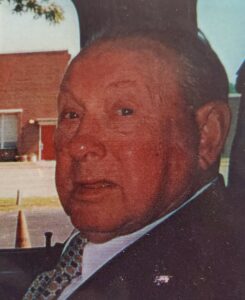 Lewis Samuel Hogge, affectionately known as “Cap’n Sam”, was born November 12, 1921 in Jenkins Neck. He was the oldest of ten children born to Lewis “Harvey” Hogge and Sarah Owens Hogge (Tessie). Sam began his education at the Maryus School and completed it at Achilles High School.
When Cap’n Sam was four years old his family established their homestead at Maryus. Throughout Sam’s childhood, his father maintained a livelihood as a waterman and a farmer. Cap’n Sam followed in his father’s footsteps and from an early age became a familiar sight on the local waters. Pound fishing, crabbing and clamming became his lifelong pursuits.
Sam married Mary Catherine Haywood Hogge, and they became the proud parents of three children: Elizabeth Ann Hogge, Mary Elaine Hogge West, and his namesake Lewis “Sam” Hogge, Jr. As an extra bonus he became the son-in-law of the much revered and well-loved waterman, Cap’n Coley E. Haywood who reigned as the unofficial patriarch of the Guinea watermen until his death at the age 109. Through 38 years of marriage Cap’n Sam plied the water on his beloved boat, the Mary H., which currently rests in the yard of his family homestead.
Now retired, Cap’n Sam still makes frequent visits to “The Creek” where he greets returning vessels, checking their catches, and reminisces about the old days. Looking back over the years, he cannot recall a single time when he did not enjoy being on the water. Some events in his past stand out quite clearly, such as the devastating “Storm of ‘33”. Watching the waters rising through the cornfields toward the home, his family became concerned about the safety of their hogs. Upon the release from their pens, the hogs slowly made their way to the house where, surprisingly, Cap’n Sam’s mother allowed them to take shelter in the front hall. World War II also sparks vivid memories for Cap’n Sam. He recalls watching submarine nets being placed across the York River, the U.S. Fleet sailing up the river, and the tragic death of his younger brother, Calvin.
Cap’n Sam currently resides in his home in Severn. He spends quiet days sharing his life and experiences with his close companion Carolyn Howlett. As the Grand Marshal of 1999 Guinea Jubilee, Cap’n Sam fittingly closes a century of proud traditions and exemplifies the rich heritage of the Guinea watermen.