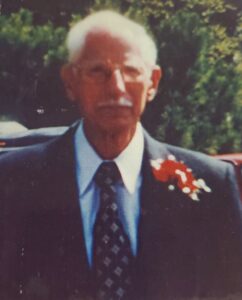 Leonard Leiffer has a long history of service with the Guinea Jubilee. Beginning in the early years at Hayes Plaza as a committee member, helping to organize the oyster tonging and crab pot pulling contest and as chairman of the Abingdon Ruritan Club Guinea Jubilee Committee.
Leonard is quoted as saying, “I have spent most over 40 years as a diesel mechanic and in that time have worked on most of the large work boats in the area. The boats have changed from mostly large dredge boats used to dredge oysters and crabs to small boats that can be used for fish, clams, oysters, and crabs. The watermen have also changed. In order to make a living, most watermen have to be able to change from crab potting or claming to dredging or netting as one type of shellfish gets scarce or another becomes more plentiful. The whole seafood industry revolves around boats with diesel engines, and I have worked on, or rebuilt engines for, most of the local watermen at one time or another.”