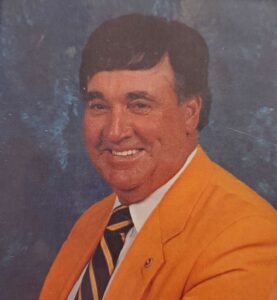 Raymond Kenneth “Kenny Man” Kellum, nicknamed by his grandmother, was born on March 9, 1939 to Bud and Susie West Kellum. He has two sisters, Beulah Colon and Evelyn “Cookie” Smith and two brothers, Steve and “Joe Boy” Kellum. Like his parents, he went to Severn School. By the time he attended Severn School it only went to the third grade, so he finished his education at Achilles High School.
“Kenny Man” is a member of the Church of God where he and his wife Dorothy were married. They have one son, Tony, who is also a waterman. Tony and his wife, Lisa, have one daughter, Cassandra Rene, who, according to “Kenny Man”, is the world’s greatest granddaughter. “Kenny Man” and Dorothy live on Horse Point Road about a mile from his boyhood home.
Born and raised in Maryus, “Kenny Man” has spent his life working on the water. He began going out on the water with his father when he was nine years old. By the time he neared his teens, he accompanied his father to a fish camp in Fox Hill where watermen lived during the week while running pound nets. His first boat was bought used from Deltaville; the second, the “Dorothy K”, he had built new in 1979 by Kenneth Hall. The 40-food “Dororthy K” is docked at Brown’s Bay. “Kenny Man” crabs in the spring and fall and says in the winter he oysters and hunts deer. In January it’s time for rock fishing. His crew usually consists of his brother-in-law Odell West and next-door neighbor Ellis West. His partner in the haul seine operation is Bill Lett.
“Kenny Man” is featured in the book, “Rural Virginia” by Bill Westbrooke and John Whitehead and also in John Whitehead’s book, “The Watermen of the Chesapeake Bay.” A member of the Virginia Marine Resources Commission, “Kenny Man” is also active in the Moose Lodge. He has also been a member for over 30 years and has attained the Pilgrim Degree, its highest award. He has also been a member of the ritual team for 20 years and has served as governor of the lodge twice.
“Kenny Man” is a little hesitant to recommend the water to young people today; however, he has no complaints. He’s content. “If I had my life to live over again, I wouldn’t change it.”