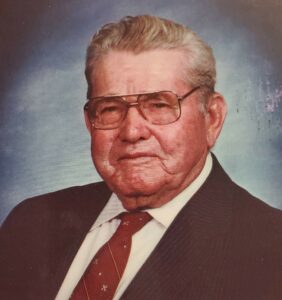 Woodrow Wilson “Bill” Owens was born on May 24, 1913 and raised in Jenkins Neck. He was one of eight children born to John Henry and Ida B. Owens. In 1933 he married Janie Estelle Coates and 33 years later married Margaret B. Kemp in September 1963. Bill had six children, Barbara Jean Thompson, Shirley Mae Sterling, Linwood Woodrow Owens, Betsy Jane Jenkins, Claude Mitchell Owens, and James Bland Owens.
Bill has been a resident of the Guinea area all his life and a waterman for most of his 90 years. He clammed and oystered with his father during the Great Depression. Deciding to made a change, in 1934 Bill went to work for a short time for the National Park Service in Yorktown helping to build the roads to Williamsburg and Jamestown. Later he got a job at Newport News Shipbuilding, where he operated a crane in the Armor Shop for seven years. Following World War II, he returned to work on the water, fishing pound nets out of Poquoson from May to October 1 and oystering in the James River from October 1 to May 1. In 1950, he came home to work, fishing first for Edgar Hogge and Marion Hogge at Severn, then John King and finally Bennie Belvin, where he stayed for 28 years. In winter months, he operated his oyster boat, the “Barbara-Shirley” named after his two daughters.
Oysters were 35 cents a bushel for rough culls in 1948, he recalls. He saw 65 buy-boats in the James and remembers that in one week he harvested 200 bushels of oysters a day for five days. Bill was known as a man who could “cull oysters on the bottom before he would bring them up.” It is said he could tong as many oysters as three men could. Until he retired in 1986, Bill oystered in the James and Rappahannock waters, spending nights on his boat to get an early start at 3:00 a.m. in the morning.