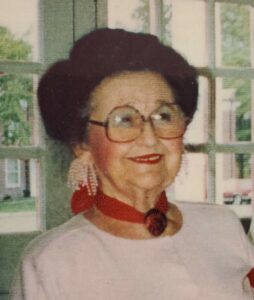 Although she spent most of her adult life as a resident of Severn, Louise was born on July 27, 1911 and raised in the Jenkins Neck (Perrin) area of Guinea on the banks of the York River. The family of seven included her parents, Clarence and Annie Lee Owens, a sister, Estelle, and three brothers, Marion, Linwood and James.
After having walked eight miles every day for eleven years, Louise graduated from Achilles High School. Summers were spent in the York River crabbing to earn money for books. A prosperous Richmond couple who vacationed in Jenkins Neck became so smitten with Louise that they offered to adopt her and give her all the “advantages” of city life. But Annie Lee would not part with the only child she felt she could depend on.
Their home was destroyed by the August 1933 hurricane, and for two years the Owens family lived with neighbors until the W.P.A. build them a cottage nearby, but well away from the river shore. All her life, Louise was terrified of storms and would not leave home, even on a cloudless day, until every window was securely closed.
On April 23, 1941, Louise Owens married Rudolph Shackelford, and so began the second, much longer chapter of her life. Rudolph was one of eleven children of John Matthew Shackelford, proprietor of the general store at Severn, a business established around the time of the Civil War by his father, William. When John Matthew died in 1943, Rudolph and his younger brother Roland operate the store for the next thirty years. Among the many types of merchandise carried by the store were groceries, clothing and shoes, paints, animal feeds, fishnets, rope and twine. The considerable marine business and the credit extended to local watermen played a vital role in sustaining their livelihood and the Guinea way of life.
Severn, like many county stores, also included a post office, and the Postmaster until 1957 was John Matthew’s brother, William, known to everyone as “Uncle Bill”. When advanced age and poor health made it impossible for his to continue, Louise was persuaded to accept the position, and she remained in office until her death on May 9, 1996. After more than a century of service, Severn Post Office closed in October of that year, a devastating loss to the community. For Louise, her postal customers were extended family, and she was Ann Landers and Mother Teresa rolled into one! One day her good buddy Thomas E. Kellum, AKA “Pot Jim” came to her in tears with a bill from the IRS for $700.00 in back taxes, three years overdue. Louise spend the better part of that day searching her records and finally turned up the money-order receipt proving that Pot Jim had indeed paid his taxes.
For 38 years of such dedicated service to the watermen and other residents of Guinea, Louise Owens Shackelford was honored as a Grand Marshal of the 1995 Guinea Jubilee.