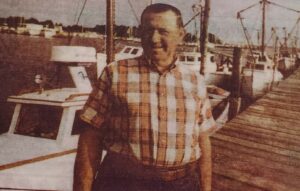 William Jennings Hogge was born on November 3, 1926 to Harvey and Tessie Hogge. Jennings became a waterman at a very early age. When just a teenager, he went out with his father, who was engaged in pound net fishing, to help on the water. Later he became associated with other commercial fishermen and worked the waters fishing pound nets.
In the early fifties, he began deep sea trawling, working up and down the East Coast and as far away as Newfoundland. During that period of time, he became captain of three fishing vessels. In 1972, Jennings began working the ocean for about a year, involved in Lobster Pots for a company known as Marine International. After that, he went back to deep sea trawling.
During the early 1990’s, Jennings switched to a sea-going surf clammer working under Captain George Carmine of Poquoson. Later in the 90’s he started working part time for Herman Green and Son’s Seafood, mending nets and later fishing pound nets.
Now semi-retired, Jennings has started a new venture, haul seining. This is the first time he has ever tried this technique of fishing. Jennings is now 76 years of age, and still going strong.