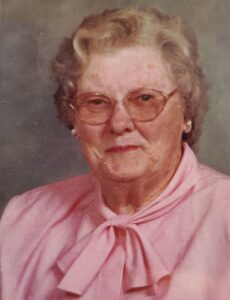 On February 20, 1928 a daughter, Edna McLain Haynes was born to William McLain and Lucy Edna Smith Haynes at Achilles on Severn Wharf Road, where she still lives. She attended Achilles Elementary and Achilles High School, graduating on June 6, 1944. This is a date easily remembered as D-Day in World War II.
Her father had an unlimited Captain’s license, and her uncle worked local boats. Edna grew up around boats on Severn Wharf Road, moving only two houses down when she married Robert Ellis Hicks on March 21, 1947 in the old Union Baptist Church. They were parents to three children: Robert Talmadge, Betty Jane, and William Ellis. There are also five grandchildren: John Robin Belch, Casey Lynn Belch Aldermun, William Brandon Hicks, Amy Lynn Hicks, and Robert Talmadge Hicks, II. There is also one great granddaughter, Christine Lynn Hicks.
Along with her parents, Edna has had the misfortune to lose three other family members. Bob, her husband, died on March 12, 1997, just nine days before their 50th wedding anniversary; Robert Tal died in an automobile accident in Urbanna, where he served as a Deputy Sheriff, and Casey died in Pass Christeen, Mississippi.
Edna went to work right out of high school at the A&P Store in Gloucester, later worked at Yorktown Ice and Storage Corp., and in 1963 she went to work a Severn Insurance Agency at Bena and was there until 1971, when the business was sold. Besides being self-employed for a while, Edna worked with Martin, Hicks, and Morris lawyers, W.E. Belvin Realty, Shackelford-Thomas Seafood, and Hogg Funeral Home. Edna taught piano for several years at home.
She has been a member of Union Baptist Church for 67 years. She has served as Sunday School superintendent, Sunday School teacher, W.M.U. president, superintendent of VBS for a number of years, choir director and pianist/organist for nearly 50 years. She still teaches every other Sunday and is active with the Senior Adult Ministry.
In 1991, she was asked by the Guinea Jubilee to serve as Grand Marshal. She says, “This was quite an honor as I am very proud to be a native of Guinea.”