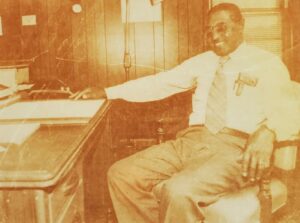 Mr. Cook was born in Bena in 1920, Cook moved at a young age to Philadelphia with his parents. When his mother died, Mr. Cook’s father brought his family back to Gloucester, where Mr. Cook’s grandfather was a local merchant.
Mr. Cook attended T.C. Walker, but left after 11th grade to go to work. He decided that he would enter one of two businesses: the oil industry or the seafood industry. His grandfather had been in seafood so Mr. Cook decided that was what he should do. “It was much easier then, than it is now,” he said. Back then a business could be started with a few thousand and an idea. Today “$10,000 – $15,000 won’t even get you in the door,” he said.
Mr. Cook has been a member of Berea Masonic Lodge #114 since 1937. He is also a member of the Gloucester Rotary Club and the county’s Chamber of Commerce. He and his wife, the former Velma B. Bell, are members of First Morning Star Baptist Church, Bena. The Cooks have one son, Eldridge N. Cook, Jr.
Mr. Cook has also been a member of the Gloucester County Planning Commission for well over a decade. He was a member of the county’s Social Services Board for eight years including four as chairman. Mr. Cook is a former chairman of the Gloucester County Democratic Committee.
Mr. Cook was recently appointed by Gov. L. Douglas Wilder to the Virginia Marine Products Board, which is responsible for promoting Virginia’s seafood across the nation.
Starting his business as an oyster planter, Mr. Cook soon had requests for shucked oyster. “It seemed like it was a right good demand, “Cook said. He set up his shucking house off Sarah’s Creek in Bena in 1954, when he acquired the former Atlantic Crab Co. property. Years later, when the oyster industry was in decline, Mr. Cook purchased two neighboring businesses: Tidewater Seafood and Gloucester Seafood Packing Co.