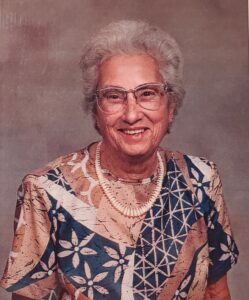 Hazel V. Jenkins was born in Bena to Virgie and John Campbell Jenkins. She was the fifth of eight children, three brothers, and four sisters. Hazel was first introduced to the life if a waterman by her father, Campbell or “Capt. Cammie,” as he was called. Capt. Cammie and Martin Jenkins owned a boat named “The Mayflower,” and they freighted peas, watermelons, and potatoes, which they raised, to Baltimore. Hazel and her brothers, and sisters worked in the field crating the peas and potatoes.
In 1933, Hazel married Harry J. Jenkins and moved to Maryus, where she spent her entire married life of 55 years. Hazel gave birth to six children. Alice Virginia Jenkins, who died as an infant, the late Braxton Randolph Jenkins, Harry James Jenkins, Jr., Faye Jenkins Deal, the late Sheila Jenkins Griffeth, and Keith Allen Jenkins, who died as an infant. Hazel was a mother, wife, and family caregiver. While taking care of her husband and children, she made most of the crab pots that her husband used on the water. After all the children were school age, she became an Avon representative. It was during this time that she came to know and love all the “Guineamen. Hazel enjoyed just visiting with the people more so than selling the products. Then in 1966, she went to work for Plaza Pharmacy where she worked for 33 years.
In 1952, Hazel gave her heart to the Lord during a revival meeting at Union Baptist Church. She sang in the church choir for many years, participated in mission groups, and is still a member of the Joy Group. Since being born again, she has faithfully supported her church. Although her life has included much tragedy, Hazel says that her strength has been through Jesus Christ her Savior.
In 1990, after her husband’s death, Hazel moved back to Bena where she resides today. As the first woman Grand Marshal of the Guinea Jubilee, Hazel enjoys the title of “First Lady.”