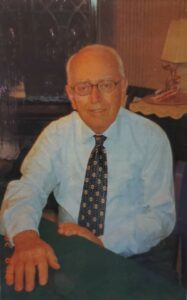 Wilbur E. Templeman was born in November of 1924. His parents were James A. and Sarah Templeman. Wilbur grew up in Perrin and attended Achilles School. He later joined the Navy and served on a ship in the Pacific during World War II. After completing his military service, Wilbur returned to Gloucester and decided to enroll in the Richmond Barber School. Upon completion of Barber School, he opened Templeman’s Barber Shop at Bena on May 4, 1948. Wilbur’s first customer was the late J. Carlyle Brown.
In April of 1949, Wilbur met Florence Moman, and they were married on Christmas Day, 1949. They have two children, Linda and Jim Templeman. Wilbur has been the “Barber at Bena” for 55 years, where he continues to work three days each week. When not working, he and Florence enjoy their time together at home.