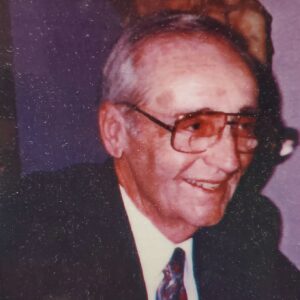 Willie Calvin Haywood was born on September 9, 1921 in Maryus. The second born child of Willie and Ruby Haywood, Calvin had two siblings, a brother Vernon and a sister Christine. At age 16, he and his brother started working in their father’s seafood business, which laid the foundation for future ventures. In 1943, Calvin married the former Mayme Hogge, and they had three children, Willie, Richard, and Debbie. All three of Calvin and Mayme’s children were involved in the seafood business at an early age and were responsible for various duties during their school years.
Calvin joined Union Baptist Church in the late 1940’s where one of the first orders of business was to assist in getting the new church built. He served as Sunday School superintendent, chairman of the Finance Committee, was one of four Trustees for many years, and was a lifetime Deacon.
During World War II, Calvin worked for the Yorktown Naval Weapons Station, where he drove a tractor and trailer throughout the East Coast delivering ammunition to various submarines and battleships. After the end of the war, in 1945, he started his first business, Haywood Seafoods. With one truck, his good friend and cousin, Eldred “Bear” Haywood, as his assistant, and a pad of paper in his shirt pocket to track inventory and prepare invoices, his primary goal was aimed at getting the freshest product at the best price from fishermen docking along the Virginia coast. As quickly as they filled their trucks, they would search out buyers for the fresh fish, crabs, and oysters. They depended on ice to protect their product, because they did not have refrigerated trucks.
Gradually Calvin expanded his fleet and installed a refrigerated warehouse at the plant. In 1972, Calvin purchased an idle oyster shucking plant and named it Haywood Oyster Co., Inc. The plant employed sixty oyster shuckers capable of shucking 500-600 gallons of oysters per day. They also leased State oyster grounds to grow oysters. In 1977, Calvin built a modern processing plant, Quality Fillet House, Inc. Managed by good friend John William Deal, Jr., the crew of thirteen could process 10,000 flounder fillets per day, an amount that previously demanded the combined efforts of 25 experienced individuals. In the 1980’s another company was formed, Seafood Packers of Virginia, Inc. Located in Norfolk, the Company handled the capture of eight or more trawlers, which allowed Haywood Seafood to buy fish directly from the boats.
Calvin assisted in the startup of People’s National Bank, where he served on various committees as well as one of the board members. He was a charter member of the Loyal Order of the Moose (lodge No. 886, Gloucester), Improved Order of the Redmen (Sioux Tribe No. 9 Achilles), Achilles Masonic Lodge No. 281, the Royal Arch Chapter AF & AM No. 58, the Scottish Rites, ACCA Temple – 32nd Degree Mason.
In later years, Calvin developed a love of golf and often played with his good friends “Scoot” Emerson and John William Deal, his son Willie, and his daughter Debbie and son-in-law Doyle. After a long illness, Calvin passed away on July 16, 1999. His wife Mayme, sons and daughter-in-laws: Willie and Jeanne, and Richard and Sharon, and daughter and son-in-law: Debbie and Doyle as well as grandchildren: Garrett and Cassie survive him. He is buried at Rosewell Cemetery, White Marsh.