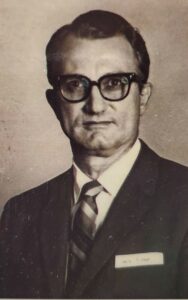 “As long as there have been Hogges in the United States, there have been Hogges in this place,” Morris is quoted as saying.
Morris Rowe Hogge was born on November 5, 1919 to Betty Eudora Heywood and Alexander Andrew Hogg. He was the youngest of 10 children. Morris attended Achilles Elementary and High School, graduating in the Class of 1939. In 1940, he attended Moody Bible Institute in Chicago.
Morris married Edith W. Adams on April 5, 1942, in the old Union Baptist Church, where he became a member as a child and served his Lord faithfully as a teacher, Sunday School superintendent, music leader, deacon, and lay minister. During World War II, Morris served in Europe and later at the Nuremberg trials. He was discharged on May 5, 1946 as a Staff Sergeant.
In 1976, Morris retired as an Industrial Engineer from the Naval Weapons Station, Yorktown, after 34 years of service. After retirement, Morris and Edith traveled to every state in the Union plus parts of Canada and Nova Scotia. Edith said once they were watching the sun set near the Grand Coolee dam, and Morris grew quiet. She asked him why, “Well, I don’t reckon we’ll hear a Guinea dog bark tonight,” he told her. From 1976, until his death on July 5, 1989 Morris was associated with Hogg Funeral Home.
Morris was “Daddy” to Kenneth Morris, Elliot Franklin, and Carol Joy, and he was “Papa” to Beth, Christy, Andrea, Pam, Jeffery, and Calvin.
Morris’ greatest joy was to help others. He was honored to be the Grand Marshal of the Guinea Jubilee on October 5, 1985.