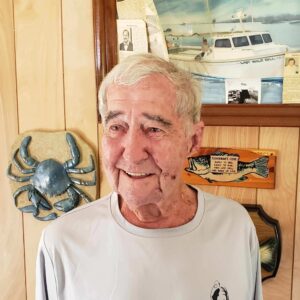 John ‘Jackie’ Thomas Bonniville, Sr was born in 1936, attended Achilles High School and at the age of 14 joined his Dad in the water. They would fish and crab until October then head to James River to oyster in the winter months.
Jackie comes from a large, well-known Guinea family of watermen. Both his father and grandfather were born in Gloucester, but his great-grandfather was born in Accomack County on the Eastern Shore in 1835; however, he moved to Gloucester and married a sweet Guinea lady in 1857 and raised his family.
There are some dates in Jackie’s career that seem to stand out. Take 1952 – they had a run of big croakers that year, so much so that one week’s take-home for him was about $700.00! He offered it to his Mom but she said, ‘You worked hard for that money, use it to buy yourself a car.’ And that’s exactly what he did – he bought his first car, a ‘David Bristow green’ 1940 Mercury. Also during that year, his Dad had a sharp-looking 39-foot boat built and named her ‘Kathy B’.
In 1954, Jackie married his beautiful wife, Ruth Adelle Coates, on September 13th. Their marriage lasted until her passing in April 2019. They had three children: 1 son and 2 daughters, one of whom is deceased.
In 1963, Jackie started working the ‘Kathy B’ himself, until 1988 when he had a boat built specifically for himself, the ‘Lady Wild Bill’. She was of fiberglass construction and built in Crisfield, MD, and fitted with a dredge rig – quite a nice looking boat!
Over his 68-year career, in addition to working for his Dad and for himself, Jackie also worked several large boats for other well-known Guinea watermen – men like ‘Noody’ Belvin, Maywood Shackelford, William Rowe and John Heywood.
Congratulations to our 2022 Guinea Jubilee Grand Marshal, Mr. ‘Jackie’ Bonniville!