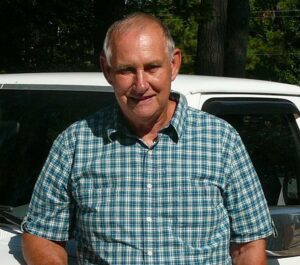 Our Grand Marshal this year comes from a Guinea family whose roots extend at least back as far as the mid-1700s here in this part of Gloucester County.
He attended Gloucester High School and in 1968 started working at the Naval Weapons Station at Yorktown. His position was temporary, however, and he soon found himself in need of a permanent job. This search led him to a local seafood wholesale company where he initially started working in 1969 as a dock-hand, loading and unloading the boats and trucks doing business there. He came to know and treasure and cultivated his relationships with all the Guinea watermen bringing their catch to this facility.
About a year later, working for the same firm, he began driving a 10-wheeler to Hampton and back every day bringing in 25 to 30,000 clams to re-plant in the Guinea waters. Having proven himself as a safe, proficient driver, he was provided with a tractor-trailer rig and a much larger route and began leaving every Saturday morning, delivering Guinea seafood as far south as Miami, FL. This continued for about 10 years, Guinea to Miami and back, every week, making about 28 – 30 delivery stops along the route. As the driver, he probably has delivered more tons of local, Guinea-sourced seafood to the market place than any other single individual. His safe and timely deliveries resulted in literally millions of dollars coming in to the community as income to the Guinea watermen.
In 1981, he became employed by a Hampton seafood wholesaler delivering to the mid-west between Pittsburg, PA, and Denver, CO, with at least 35 stops in between. After 11 years of hauling strictly seafood, in 1992, he started driving for Wal-Mart, where the minimum required experience was 500,000 safe driving miles. On one occasion there, in one week, he drove three round trips from Petersburg, VA, to Bangor, ME – he became very familiar with that route!
He retired in 2015 having driven for Wal-Mart over three million accident-free, violation-free miles.
He has survived 2 heart attacks, surgeries on both shoulders, knee replacements and is now recovering from surgery for a broken back. His work ethic, trustworthiness, determination and flexibility have demonstrated to all who know and respect him the Guinea characteristics so ingrained in his nature.
Please join me in honoring this man who delivered unknown tons of our Guinea seafood to buyers across the country and has very probably taken “Guinea” for more miles and to more stops than anyone you can think of! I offer our sincere congratulations as I introduce you to our 2018 Guinea Jubilee Grand Marshal – Mr. Ronnie Thomas!