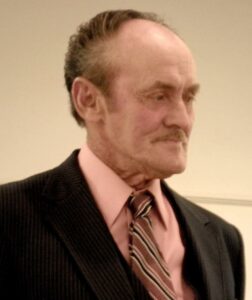 Steve Michael Kellum was born March 31, 1945 to Henry (Bud) and Susie Kellum. Steve attended Achilles Elementary School. He has two sisters, Beulah Colon and Evelyn “Cookie” Smith and one brother Kenny Man Kellum.
Steve and his wife Dale Crewe Kellum have been married for 45 years. They have one son Bryan and his wife Tracey, two grandsons Ryan and Wesley.
Born and raised in Maryus, Steve has spent his entire life working on the water. He began crab potting alone at the age of 14 in a 16 ft flat bottom skiff. Steve recalls his first major business purchase was 10 coils of wire at $90.00. He always worked the 16-20ft skiffs. Said he like the smaller boats because he worked mostly inshore and up in the coves. Steve oystered and haul seined in the winter with his brother while still crab potting and shedding soft crabs for 25-30 years. Steve also makes crab pots, hangs gill nets and haul seine. Anything that can be done on the water, Steve Michael can do it.
Just watching Steve work around his home and around the peeler floats one can easily sense the true dedication of his life to his work and family and how he takes pride in all he does. He is a true waterman.