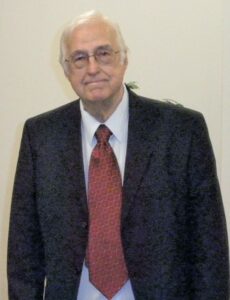 Marvin Crane was born in Pittsylvania County, Virginia on December 1, 1933. His mother and father were Effie and Frank Crane. He has two daughters, Shelby Horrell and Nancy St Clair. Marvin married Malvinia R. Bristow in 1997 on December 20 and together they have four Grandchildren, David St Clair, Leanna Bristow, Erin Bristow, and Tyler Hancock.
Marvin has had many jobs in his working career, carpenter, Hampton Police Officer, and a 7-11 store supervisor.
Marvin bought Otis Hogge’s store at Achilles on November 11, 1976 and began years of service to the people of Guinea. Otis and Marvin formed the corporation named Otis Hogge Inc. They decided to name the store, Achilles Shopping Center. Marvin ran the store for 22 years, becoming well liked and a vital part of the Guinea landscape. He carried the tradition of Guineamen meeting at the store and discussing everything from the price of crabs to politics to hunting.
Marvin also had a store in Newport News called Marvin’s Market and purchased a Subway franchise in1985.
Marvin sold the Achilles Shopping Center in 1998 to Steve Hawkins who maintain the same country charm and meeting place that Otis Hogge and Marvin had made for Guineamen for years. Marvin and Malvinia new corporation, SRB Inc., repurchased the store from Steve in January 2007. The store is still the place to see Marvin and Malvinia and the place to get gloves, drinks, food, boots, oil skins, fuel and a warm welcome from their smiling employees. They employ 15 local people at the store and at the SRB Inc. located diagonally from the Achilles Shopping Center.
Achilles Shopping Center is the last of the 11 Guinea stores that polka dotted the Guinea peninsula. Marvin, in this interview said, “I feel I am a Guineamen, because I have Guinea in my Heart”.