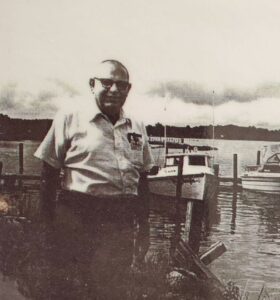 Edward C. Hogge, a local businessman, was born in 1920 at Achilles about a mile away from Holiday Marina, a business he once owned on the Severn River.
When asked if he considers himself a Guineaman, Ed replied, “Yes ma’am. I’ve been fortunate to have seen some of the world, but I still like Guinea.”
Prior to being drafted into the Army, Ed worked at the Norfolk Navy Yard, now called the Norfolk Naval Shipyard. He did cabinet making after going through the apprentice school there. From 1944 to 1946, he served in the U.S. Army Air Corps and spent most of his tour of duty in Hawaii. From 1946 to 1950, Ed ran a radio repair shop on Route 216. In 1950, he started working at the Naval Weapons Station in Yorktown, retiring in 1976 as a general foreman. It was while he was still working for the Navy that he decided to start his own business. Ed believed it was important to stay active after retirement. In the 1960s, he bought property on the Severn River and began building his business, Holiday Marina, from scratch little by little in the early 1970s. Ed’s business flourished and he stayed active in it until he sold it in 1999.
Ed was diagnosed with leukemia in July 1991. Following ten weeks of treatment at the Medical College of Virginia, he is happy to say that the cancer has been in total remission for over 12 years. “I feel very fortunate,” he said. “I have nothing but praise for the Medical College of Virginia.”
After retiring, Ed and his wife Katheryn enjoyed traveling. They visited Hawaii, a place which he had not seen since the war, and they also enjoyed cruises and travels to Puerto Rico, St. Thomas, Montreal, Monte Carlo and other parts of the United States. Katheryn passed away in March 1999, and since then Ed has continued to keep busy with community activities. He is a surviving charter member of the Abingdon Ruritan Club, President of the Retiree’s Association at Naval Weapons Station Yorktown, on the Board of Directors for the Naval Weapons Station Federal Credit Union as well as an active member of Bethany United Methodist Church. Ed has also served on the Board of Directors and as president of the Virginia Association of Marine Industries and was a member of the Gloucester Industrial Development Authority, serving as chairman for two years.