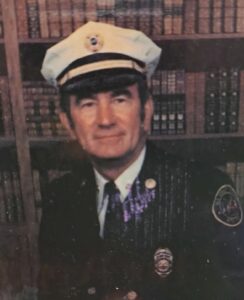 Hugh Riley Rowe was born to Mildred Riley and Samuel Emmett Rowe on August 21, 1925. His paternal ancestors came to this country from England in 1638 and, at one time, the family’s land holdings numbered over 1600 acres in the area known today as “Guinea.” Two theories as to the nickname of “Guinea,” actually involve his paternal ancestors.
Hugh was one of seven children raised on a farm in Achilles. He graduated from Achilles High School in 1943, after which he worked as a purser aboard the Gloucester-Yorktown Ferry. He married his high school sweetheart, Elizabeth Woodson, after serving two years in the Army. Hugh and Elizabeth had two children, Dianne and Woody. In 1950 he entered the field of professional firefighting, which would become his life-long love. It was that same year that he helped organize the Abingdon Volunteer Fire Department. In his volunteer efforts at Abingdon, he worked to educate the community on fire safety. He delighted in working with children from area day care facilities, schools, Cub Scouts, and churches teaching fire safety and inspiring them to serve their community through example. Many of those he taught are professional and volunteer firefighters today.
Hugh worked 28 years and retired in 1978 as Fire Chief at the U.S. Coast Guard Reserve Training Center in Yorktown. After retirement, he joined the staff at Hogg Funeral Home where he enjoyed the fellowship and blessing of sharing a hug, a laugh, and a smile with friends old and new. Hugh also found time to enjoy membership in the Achilles Lodge AF & AM No. 281, Gloucester County SALT, Rappahannock Firemen’s Association, and many other civic organizations over the years.
For Hugh Rowe, helping other people was the greatest honor he could receive. Being chosen as the 1989 Guinea Jubilee Grand Marshal was an honor to him. He represented a place and people who gave him a firm foundation in life and an honorable lifestyle. Hugh died after a short illness of cancer, February 7, 2000 at his Bena home surrounded by Elizabeth, Dianne, and Woody. Guinea’s loss was Heaven’s gain. Hugh was proud of his roots, which ran deep in Guinea soil, as he felt quite rich from having walked this path in life.