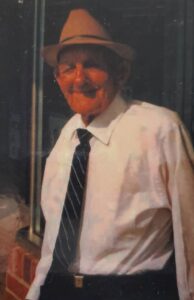 John Hennion Brown, Sr. was born on January 13, 1892 in Gloucester County. His parents were John and Susan Brown. On December 24, 1915, Hennion married Eugie Pearl Robins, and they had four children.
A waterman like his father and grandfather before him, Hennion held his first job on an oyster boat in 1907, when he was 16 years old, making $15.00 a month. He continued working on the water and spent over 40 years of his life as a seafood dealer and waterman on the York River and Chesapeake Bay. He loved to tell about growing up in Guinea. “I wouldn’t give a handful of Guinea dirt for all of Florida,” he said. As Grand Marshal in 1983, Hennion lost no time in barking out folklore with a Guinea accent that at times resembled a foreign language. He commented on how seafood pries had skyrocketed since he earned ½ cent a pound for fish years ago. “I caught quite a lot of it,” he said. “In fact, if I had all the money for the fish I caught I could buy the York River Bridge.”
Hennion was a member of the Sioux Tribe No. 9, Improved Order of Red Men, Achilles as well as a member of Union Baptist Church.