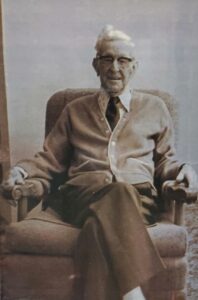 Isaac Rosser Blake, or Captain Rosser as he was known by watermen and friends, was a lifelong resident of the Bena area of Gloucester County. He was born September 12, 1893 to Stephen and Fannie Blake and was the brother to seven siblings. He married Carrie Williams on December 27, 1914, and they had two children, Isaac Rosser Blake, Jr. and Elsie Estelle Blake.
Captain Rosser was a waterman all of his life. Before he finished school, he was making his livelihood from the water. He and his son, Isaac, established Tidewater Seafood Co., and oyster business on Sarah’s Creek in the early 40’s. In 1959, they opened and operated Blake & Bass in Hampton, a crab packing business, until the business was sold in August 1977. Captain Rosser still continued to operate a soft crab shedding business, once again on Sarah’s Creek, until he was in his 90’s. He passed away in May of 1986.