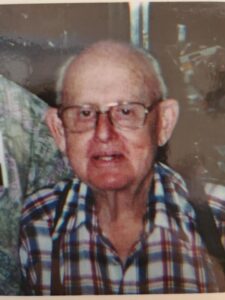 Clarence Benjamin (Buck) Rowe, Jr. was born October 7, 1920 to Clarence Benjamin and Ruth P. Rowe of Bena. Buck graduated from Achilles High School in 1943, and has lived in Bena all of this life, except for the 4 ½ years during World War II, when he served in a construction battalion unit in the Navy.
When Buck was 10 years old, he started working in his father’s store. Begun in 1920 by C.B. Rowe, Sr., in a portion of its present building the store at Bena became C.B. Rowe and Son in 1947, when Buck became a full partner in the business.
A community leader and the unofficial “Mayor of Guinea”, Buck is one of the founders of the Abingdon Volunteer Fire Company and its Chief for 16 years, an active member of the Abingdon Ruritan Club, and served 10 years on the Gloucester County School Board.
In 1948, Buck married Doris Belvin, and they had one daughter, Antoinette. Buck has been an active member of Union Baptist Church for 76 years.
Buck is proud to say he’s a Guineaman and believes that it is more popular to be from Guinea today than ever before thanks to events like the Guinea Jubilee and efforts by groups like the Guinea Heritage Association, which help to instill pride among members of the community.
Buck has recently given his store and the land on which it sits to a group whose main charge is to convert it into a museum highlighting local history – the C.B. Rowe Jr. Memorial and Guinea Museum Foundation, Inc. The general store has been a Guinea landmark for 82 years and Buck wants to insure that it stays that way for generations to come. “I love people,” said Buck. “It’s a good life… being a native and being able to operate in my own yard.”